News / How Can Lizards Adapt to a Changing Climate? 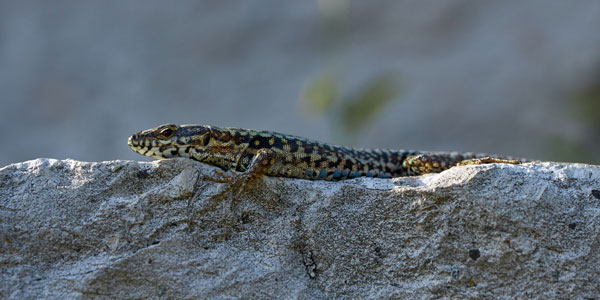 Photo: A common wall lizard at a sunbath (Photo by Wolfgang Hasselmann/Unsplash)

Researchers at the University of Toronto and Ohio Wesleyan University are collaborating in a quest to find out how lizards can adapt to the world’s changing climate.

Sophie Berkowitz and Simone Collier, undergraduate students at Trinity College and Victoria College in the Faculty of Arts & Science, are using computational tools to analyze lizard movement and body temperature under the supervision of Vianey Leos Barajas, an assistant professor in the department of statistical sciences and the School of the Environment.

They’re working closely with ecologists at Wesleyan, Assistant Professor Eric Gangloff and undergraduate students Ciara Pettit and Sierra Spears, who cared for the lizards and provided the primary data of lizard movement and temperature.

The team’s research focuses on analyzing movements of lizards when placed in an arena with a “thermal gradient,” meaning an observation area where one end is warmer than the other. The sand-filled arena is one metre long and has a lamp as a heat source. Using open-source object-recognition software, statistical and environmental science student Berkowitz extracted movement data from hours of lizard footage to prepare a dataset for statistical analysis.

A key challenge was tracking the movement of the lizard when it crawled into the sand or attempted to crawl up the side of the observation arena, out of view of the camera, Berkowitz says.

“They try to bury themselves in the sand and get caught. Then the ecologists have to fish them out,” Berkowitz says. “Lizards have minds of their own, and our research definitely has to accommodate for that.”

“What we're trying to do with these models is to determine their thermoregulation behaviours,” Collier says. “We want to find patterns in the lizards’ movement based on how they move between these different temperature zones.”

Lizards are ectothermic, which means they rely on the temperature of their environment to regulate their body temperature. One would expect, then, rising temperatures to affect a lizard’s behaviour. These changes in behaviour in turn hold important clues about how lizard species might be affected by climate change.

"It's really important for us as scientists to get a better understanding of how their thermoregulation works, and how it is affected by their environment,” says Berkowitz. “The hidden Markov models work on the premise that the observations are the product of an underlying behavioural process.

“If we can understand things that we can't readily observe, we can help understand the future of our lizard species in terms of climate change."

The research partnership highlights the intersection of statistics and ecology: Gangloff’s team of ecologists provided the primary data to the statistical and environmental sciences team at U of T for further analysis.

“We get to do a lot of fun projects and work with a lot of diverse students that are quite capable. They are using their statistical skillset to expand the notion of what statistical sciences mean in practice,” says Barajas.

In addition to contributing to the field, the two U of T students say they enjoyed gaining hands-on research experience under the supervision of a professor while building important skills. Berkowitz and Collier encourage students to pursue research projects if they are interested in the topics.

“If you meet a professor that's researching something you're interested in, just reach out and see what comes of it. You never know,” says Collier.

(Editor’s note: This article originally appeared on U of T News)