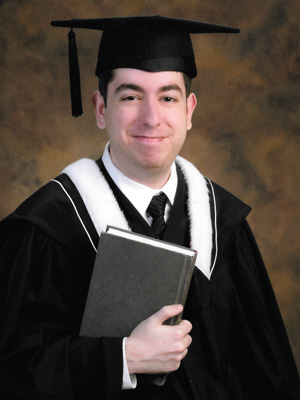 A 2020 Governor General’s Award has been given to alumnus Daniel Fusca. The Silver Medal is awarded annually to the undergraduate who achieves the highest academic standing upon graduation from a bachelor degree program.

From the time he was a young boy in Toronto, Fusca knew he wanted to be a scientist. As a young intellect who loved school, especially science, math and reading, he always had a book in his desk. His parents, both University of Toronto graduates, were always supportive of his passions, making opportunities for learning available. “In high school I volunteered at the ROM with the summer camp program. It made me love the museum itself, and science, even more. There’s so much cool stuff in there. The kids love it too. They love dinosaurs and can rattle off the names of all the dinosaurs.” The only paid job he’s ever had outside of spending summers supporting the labs where he does his research, was actually at the ROM as a volunteer coordinator. It seems being surrounded with artifacts designed for learning and exploration was his calling.

Fusca was so dedicated to his passionate pursuit of knowledge, that he spent all four years living in residence, first in Margaret Addison Hall, and then in Upper Burwash. The time he saved by not commuting became devoted to his studies. “This time management meant I could do more work, or sleep, being more productive. Having that extra time helped a lot. The new experience of living on my own was really fun, and the independence was positive for me.”

COVID-19 meant having to quickly move out of residence in March, which was particularly difficult for Fusca who had called campus home for four years. But his work has continued remotely, writing and running programs. He’s become an expert at using Zoom. His focus in bioinformatics and scientific computing also means that he has remained busy doing research even though the physical labs are closed. Research is his true passion. “I have two projects on the go right now: one in cell and systems biology, and one in ecology and evolutionary biology. I can’t wait to get back into the lab,” says Fusca. He hopes some of his work analyzing DNA sequences and mapping genomes can be used in determining how genes turn on and off in cancer cells or during various stages of early fetal development, for example.

Fusca’s CV is impressive, having worked with passionate researchers, and being inspired by some incredible professors. One who stands out is Professor Corey Goldman, “who’s a legend,” according to Fusca. “He taught me third-year Diversity of Mammals. He was so nice and accommodating. He used to record his lectures but on our last day of class, he forgot. So he went back to the empty lecture hall and recorded himself to make the lesson available for us. He cared about us and our learning, his expectations were always clear. He really encouraged me to keep going with my research.”

Fusca didn’t know he had been nominated for the Governor General’s Academic Award. The Silver Medal, awarded to the undergraduate who achieves the highest academic standing upon graduation from a bachelor degree program, came as a surprise in his inbox when he opened the e-mail informing him that he’d won. He is honoured to be a recipient. “It validated continuing my studies. This fall I started a master’s degree in ecology and evolutionary biology. I am living at U of T’s Graduate House. I like living on campus again. My work is all done online so I’m still stuck at home but being on campus makes things feel a little more normal.”

Ultimately Fusca is looking toward a PhD. “I want to continue with research full time. My personal curiosity fuels me. I’m asking questions and hope to find satisfying answers. I also like learning from my colleagues.”