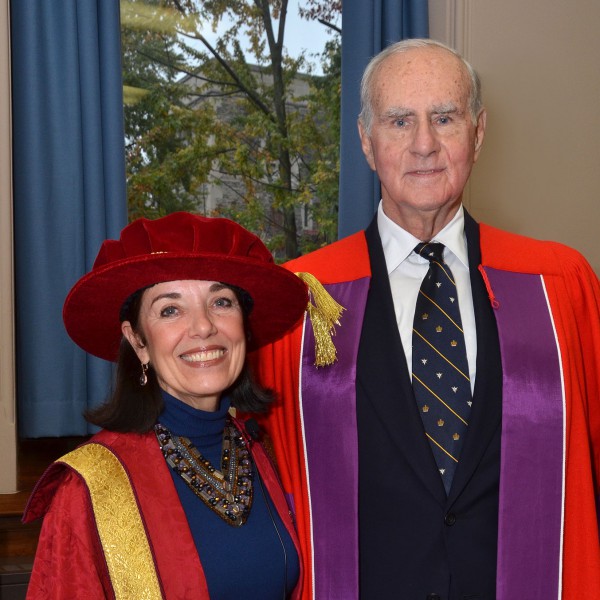 Jackman has spent his life building a financial services empire, including the Empire Life Insurance Company, the National Trust Company and Dominion of Canada General Insurance. E-L Financial remains one of the largest investment and insurance holding companies in Canada.

President William Robins says: “Dr. Jackman has championed higher education at Victoria University over many decades. Vic is grateful for Dr. Jackman’s commitment to education which has profoundly transformed the student experience. His generous philanthropy has ensured our programs and campus are both enriching and immersive.”

Jackman’s dedication to education, business and politics is remarkable and spans more than half a century. A loyal and engaged alumnus, he has donated millions to Victoria University as well as to various faculties and schools across the U of T campuses. He served as Chancellor of U of T (1997–2003), and is a long-standing member of both Victoria and U of T’s Chancellors’ Circles. His generosity has supported the construction of Victoria’s Rowell Jackman Hall, U of T’s Jackman Law Building, and established the Jackman Humanities Institute (JHI) at U of T. The JHI supports the Scholars-in-Residence program at Victoria College—a unique, immersive research experience that allows undergraduate students to spend a month working on projects with faculty members from across the humanities and social sciences.

For his dedication to public service, Jackman was named the 25th lieutenant governor of Ontario (1991–1997). He also received the titles of Officer of the Order of Canada (1997) and Member of the Order of Ontario (1998) as well as the Canadian Forces’ Decoration in recognition of his service as an honorary colonel (2000). He is the recipient of 10 honorary doctorates, including a doctor of humane letters from Victoria University in 2011. In addition to his graduation with a bachelor of arts from Victoria in 1953, he also earned a U of T law degree in 1956.

Jackman’s family also shares a storied history at Victoria and the University of Toronto. His mother, Mary (Rowell) graduated in 1925. His grandmother Nellie Langford Rowell graduated from Victoria (1896) as did his sister Nancy Ruth (1942); his maternal grandfather, Newton Wesley Rowell, was chair of the Board of Regents; Arthur Leopold Langford Vic 1884 was registrar and Frederick William Langford was principal of Emmanuel.