When Jamie Le graduated from U of T this past June, she wore a ring and a University blazer from the Class of 1962. 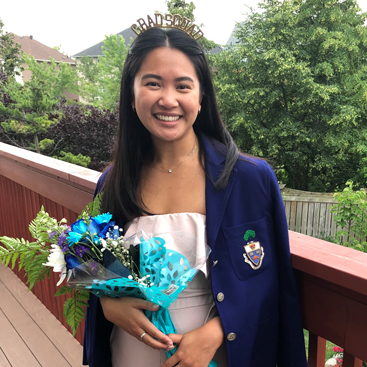 The blazer and ring were a gift from Joyce A. Ballagh Vic 6T2’s family. Ballagh passed away in the summer of 2020—about a year prior to Le’s convocation. Honouring Ballagh’s memory on the date of her own graduation only added to the life moment for Le. “In the short time that I knew Joyce, she was an inspiration above all—to live a life full of travelling, to be adventurous no matter how old you are, to be in the present moment and embrace every interaction.”

“At first, I felt uncertain if I was the 'right' person to own Joyce's memorabilia knowing how much Vic and U of T meant to her, but I knew that one thing had to be done to show my respect to her for choosing me. Choosing to wear Joyce's memorabilia on my graduation day also made me look forward to graduating even more knowing that I could make it that much more special, and I couldn't be more grateful to Joyce for choosing me. She was a woman full of wonders with a life so full and that is what I aspire to be.”

Le first met Ballagh through her sister. “I had the absolute honor of knowing Joyce through my sisters' partner, Joyce’s grandson. Joyce and I bonded a lot through our purest memories at U of T and she was especially delighted to find out that we went to the same residence—Margaret Addison Hall,” says Le.

The blazer is in excellent shape and Le never doubted that she could style the vintage piece. “As graduation approached, I vowed to Joyce’s daughters that I would honor Joyce by wearing her blazer and class ring with pride. Everyone looked to me with uncertainty thinking, 'isn't the blazer a little old? You sure you want to wear that?' I never doubted that I could wear it in some trendy way by wearing it over my shoulders!” 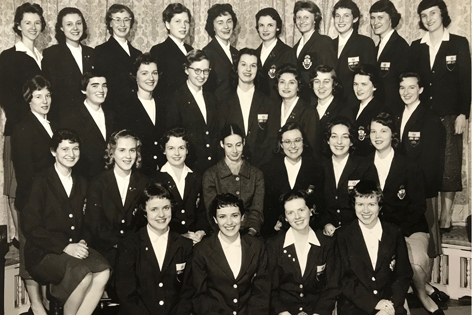 Seeing Le in her mother’s blazer was particularly meaningful for Ballagh’s daughter, Nancy: “In a moment that brought tears to all our eyes, Jamie declared that she would proudly wear both items to her own graduation in 2021. My sister and I couldn’t have asked for a more perfect landing place for these sentimental items.”

In her obituary, Ballagh (pictured top row, fourth from the left) is remembered for having “formed incredible bonds during her school days with friends she connected with regularly in life and who played nurturing roles in her final days.” Ballagh was a proud Vic alumna and her daughters, Nancy and Shannon, recall that she met up with her university friends annually—often at Reunion as well as other anniversary events. Ballagh was also a Vic Annual Fund donor.

After graduation, Ballagh went on to teach in Oshawa and Hanover, and later owned an insurance brokerage firm with her father. She is remembered as intelligent, well-organized, resourceful, adventurous and as an advocate for women. An avid traveller, she also walked the El Camino de Santiago on her own at the age of 75, showing herself once again that she had the mental and physical fortitude to set and achieve her goals.

“As a proud university graduate,” her daughters say, “our mom instilled in her children and grandchildren, the importance of post-secondary education and especially the experience of residence living. She knew how much the camaraderie of friends had meant to her when she was away at University and how much those connections supported her throughout her life. She wanted each of us to have that same experience.”

Like Ballagh, Le is also a proud Vic alumna. She credits Vic with some of her best memories—including meeting her residence roommate, Leah Chan, who ended up becoming her best friend. The two bonded over breakfast every day by heading to Ned’s Café before class. “Together, we explored Vic and were inseparable adventure buddies. Although our residence at Vic’s Margaret Addison Hall was short, we always thought that it was fate that Vic roomed us together and we thank Vic immensely for that.”

Both Le and her former roommate graduated this past June from the same program—kinesiology and physical education. They continue to live together in Toronto. In September, Le will return to U of T for graduate studies in kinesiology. She looks forward to conducting research in women's health and exercise in conjunction with a collaborative specialization in women's health at the Dalla Lana School of Public Health.